On June 27 Trish Pearson was installed as Governor at Anthony's  in East Haven.There was quite a crowd and it was a great night. 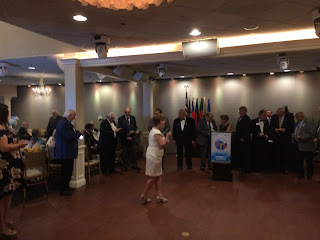 Here she is about to be installed. She gave a fine speech which thanked all those who have helped and outlined her plans for the year. 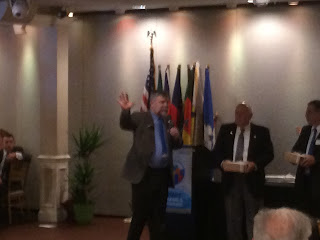 Here is outgoing Governor Paul taking care of some of the preliminaries before dinner. The cocktail hour and dinner were outstanding as usual at Anthonys.

As usual at the end was the passing of the Governor's hat. However Trish changed it by passing the hat as a collection for her Governors project in Uganda. The PDGs got into the spirit.
Abe gave a history of the Hat etc and mentioned the trophy which was given to Rotary in UK and Scotland and Ireland. That trophy is still awarded every year. Wouldn't it be great to get a representative of a winner of that trophy to come here to talk about Rotary. 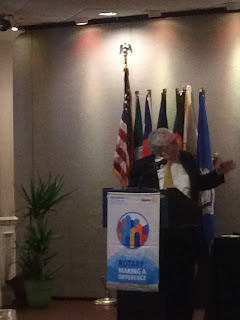