RYLA-What's 109!(that's factorial) Its the Hugs at the end

RYLA is a leadership training event for high school students. District 7980 holds one in the Fall and one in the Spring each year. One was held October 27 to 29 at Camp Hazen in Chester, Connecticut.
The students come in on Friday knowing no one and after a short period the facilitators get the whole group dancing together. 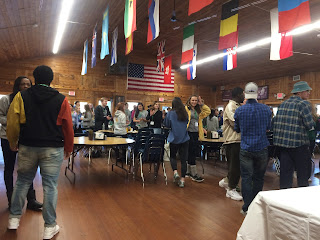 and here's the facilitators talking about the next activity 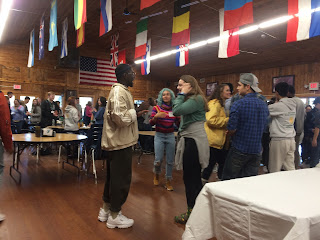 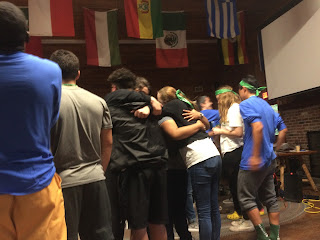 After spending about 60 hours together the group has bonded and really cares about each other. The last thing the group does is hug each other. There were 109 people at Camp Hazen(86 students, plus all the facilitators, student directors and RYLA chairs) on Sunday and they all hugged each other. Let's see 109 people and each wants to hug the other 108. That's 109! hugs(109*108*107*106.....) That's a lot of hugs. Of course during this hugging process the parents who are picking up their students are trying to put 100 cars in a parking lot which can handle 50 cars.

In any case the students became leaders and created a support system of students and facilitators.

The students prepare a proposal for a service project. On Sunday we heard 12 proposals for projects which were judged by a panel of Rotarians. They were very interesting. Here's one team. Below that is the team of Rotary Judges including Mark Cibula(East Hampton), Cathy Mauritz(Naugatuck), John Coleman(Trumbull), Kevin Guptill(New Haven) and Trish Pearson(Governor and Orange) 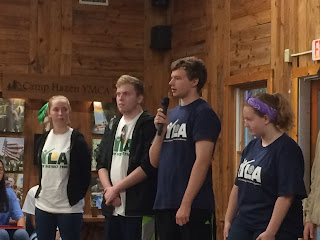