The Wallingford Rotary club meets at the Library Bar and Bistro. Yes the building was formerly a public library but what a beautiful building. The owner also owns a vineyard so the wine is probably good but I didn't test that.

Here is their President Maryam Taylor discussing some of their plans 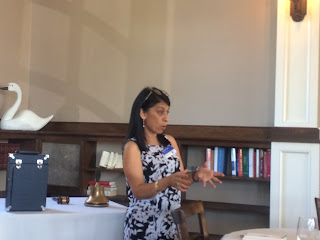 And here's a member discussing the Antique Car Show they have planned for September 9. It's a fund raiser that they have done in the past. 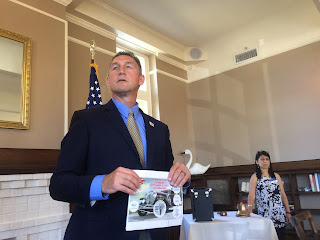 I lived in Rye, New York for many years. A visiting Rotarian at this meeting was Tom Saunders a Rotarian from Rye, NY who is moving to Connecticut. His daughter and my daughter were close friends but have lost touch. Now they can be in touch again. Tom is trying to decide what CT Rotary club to join. What a small world. Tom is the handsome one on the right. 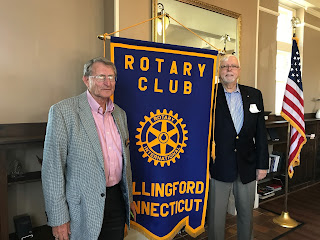 I also met Ellen Mandes a Past District Governor at this meeting. She was Governor from 1998-99, the first woman governor in our District. She was Assistant Governor under Mac Leask before that.  She had some advice for me i.e. be sure to include some fun things in your District Conference!!
Posted by jack solomon at 1:35 PM