What a night at Newtown Rotary Club. They inducted two new members and converted an Honorary Member(former Selectperson) to a regular member, had student of the month from three schools and welcomed Governor Elect Larry back from San Diego.
Here's the induction of  three new members. The club has a neat custom of shaking hands with each new member by each club member right after the induction. This results in an interesting scrum(whatever the phrase used in Rugby) 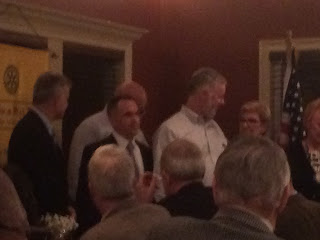 And PDG Brian Amey was there as well as PDG Alan Hurst. We were PDG rich.
Posted by jack solomon at 5:34 AM