The Rotary International Convention draws a lot of people who want to get to know each other.

Every Rotary conference has memorable stories, has two for me. 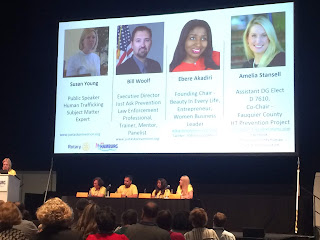 In a session on trafficking a mother told the story of her daughter who was trafficked while she was living at home. A gang threatened the family and the daughter felt she had to do what they said. Later after it became obvious that something was wrong, she was asked, Why didn't you say anything? She said, because nobody asked. A very sad story but Rotary is working on it. The above picture shows the mother on the left and three other speakers.

An optimistic story is that of a young lady, in , who saw that many children could not do well in school because at night they had no light. She was able to make a system using solar energy that gave light at night to even very poor families. And it was made partially with used garbage bags. She urged us all to talk to people about what they need and then work to do it.


Some Comments by various speakers
1. Rotary is not an organization we are a family
2. Rotary allows us to live beyond ourselves
3. To engage others, let them suggest ideas on what to do
4. If you do what you've always done you'll get what you've always gotten
5. The best way to predict the future is to create it
6. Friendship is the glue that binds us together